A Place For All Seasons, our inaugural exhibition in 1992 celebrated the 50th anniversary of the Solowey’s permanent move to Bucks County. The show featured works for every part of Ben’s career and photographs of the evolution of their property.

While the Studio had the support of family, friends and patrons, no one was convinced that people might come to a small farm in upper Bucks County, Pennsylvania to the Ben’s studio and its contents. Good reviews and word of mouth brought a regular flow of visitors throughout the summer, bringing a new audience to Ben’s work. Many were delighted to discover the only intact studio from the Golden Age of Bucks County painting.

In 1936 the Soloweys decided to forgo their annual summer treks throughout the northeast and find a place of their own, outside of the city, which they could return to regularly. Ben’s interests had gone beyond the painting studio and he had already built his first pieces of furniture. He wanted space to pursue all of his interests, in a setting that would inspire and renew.

In Bedminster, Bucks County, Pennsylvania, he discovered a dilapidated 34-acre farm that he felt was just right. The house and barn sat in the middle of the property, far off the road and away from the distractions of neighbors. With commanding vistas in every direction, he no doubt already saw the first landscapes that he would continually see for the forty two years he was on the farm. 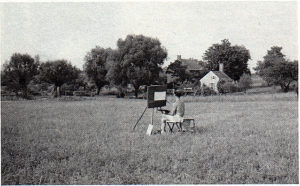 The early days were not easy. “It was primitive living those first years as we rebuilt and restored the house and the farm buildings,” wrote Rae in letters to friends and family over the years. “Ben would say, ‘Let no man speak of Thoreau to me.’ But we loved the place and loved it more and more as time went by.”

The Soloweys moved to Bucks County permanently in 1942 and never looked back, despite living the first seven years without running water or electricity. A far cry from Fifth Avenue in Manhattan where they had lived.

On the property he would create some of his greatest work. He restored the 1765 farmhouse, furnishing it with his own recreations of classic furniture he admired in museums. He proved to be a true Renaissance Man, producing award-winning canvases and sculptures, while handling everything from cabinetmaking to plumbing, from masonry to gardening. 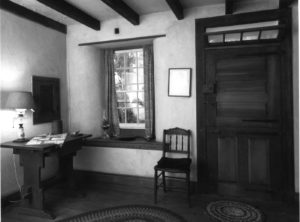 He transformed the barn into a spacious studio, creating an environment that was conducive to his work. He installed large northern skylights to get the unchanging light that an artist requires. He was responsible for all the woodworking and plaster in the studio, all of which he did by himself, by hand. The studio was in the tradition of the great artist studios that dotted the landscape of the area.

That the Studio stands today filled with his artwork, a testament of his phenomenal talent was Rae Solowey’s wish. She wanted future generations to experience what she enjoyed most of her adult life. In the aftermath of Ben’s death in 1978, Rae continued to main the studio much as it was while Ben was working. Not as a mausoleum, but as a living, breathing space that remained alive with so much of Ben’s work.

After Rae’s death in 1990—on the 12th anniversary of Ben’s passing— our mission to preserve and promote the work of Ben Solowey was established. At the time, it was a rash idea to think that people would travel to a relatively obscure location to see interpretive exhibitions in the studio where many of the works were created.