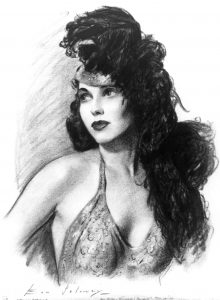 FACE THE MUSIC
Ben Solowey’s Portraits of Broadway Musical
June 1 through June 16, Saturdays and Sundays, 1 to 5 pm
Throughout the summer by appointment

Nearly 90 years, the stock market crashed, precipitating the Great Depression. Despite this financial calamity, thousands still flocked to the Great White Way throughout the country’s darkest years, with many looking to musicals to take their minds off their situations. They were fortunate that the 1930s saw musicals virtually every season by Cole Porter, Rodgers and Hart, the Gershwins, Jerome Kern, as well as newcomers like Vernon Duke, Hoagy Carmichael, Kurt Weill and Harold Arlen. 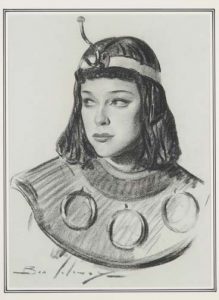 Ben Solowey captured many of its star performers, composers and producers in striking charcoal portraits that appeared in the two most important newspapers in New York, The New York Times and The Herald Tribune. Now for the first time, we present an exhibition that focuses exclusively on the musicals of the period including Anything Goes, Babes In Arms, Of Thee I Sing, Cabin in the Sky, and The Ziegfeld Follies as seen through Ben’s remarkable drawings.

Come and see Ann Miller, Jimmy Durante, Eve Arden, and Fanny Brice in the roles that would make them stars. Meet Mitzi Green who debuted classics “My Funny Valentine” and “The Lady and the Tramp” in the original “Let’s put on a show!” musical, Babes in Arms; or Tamara, who introduced “Smoke Gets In Your Eyes” in Jerome Kern’s Roberta. There are also portraits from life of composers Rodgers and Hart, and choreographers George Balanchine and Eugene Loring. 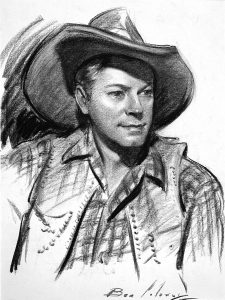 This new exhibition will include some old favorites but will primarily feature Solowey portraits that have not been seen in more than 80 years. Look for more stories and images to come your way, but circle JUNE 1st on you calendar to be the first to see this exciting new show.

Ben, unlike his contemporaries, insisted on working from life, often visiting the theatre during a rehearsal to draw the performer either right on stage (frequently under a bare light bulb) while all manner of activity swirled around him or in the more private confines of an actor’s dressing room. Because of performers’ hectic schedules, Ben sometimes had only minutes to capture the essence of his subject and the character they were portraying. Later performers took the opportunity to visit the Solowey studio on 5th Avenue in Greenwich Village where the artist could work undistracted. Ben’s portraits in the papers were eagerly awaited each week by both performers and newspaper readers as to be drawn by Solowey was a sign that a performer had “arrived.”

← Portrait of the Artist as a Young Man
Welcome Back: Celebrating 80 Years of Ben Solowey in Bucks County →