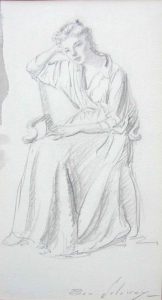 Seated Figure in Peignoir
Pencil on paper, 8 x 5 in.

Rae Solowey described how she met Ben to her friend, writer Helen Papashvilly, in a undated letter from the 1980s. The story begins in New York City in February, 1930…

“We were in the area of 72nd Street when he said, ‘Let’s stop and see my friend Ben Solowey,’ which we did do, only to have no one show! Nothing daunted, as they say, a month later, in the same general area, same routine but, an answering bell from Ben (his studio was on the 5th floor). Looking up from the ground one, through a maze of banister – there was Ben. In retrospect, and accustomed as I am to Ben’s present studio, in itself an artwork, created, if you will, by him, the 72nd Street one was rather — unobtrusive. On the easel, a jewel like still life. As we were leaving, he asked if I’d have dinner with him the next night, but I was doing something else. The next night? The magic sesame — at dinner — he asked me to marry him. Said he would done so the first night, except for this person’s presence! Difficult not to invoke the ‘what if’ syndrome had Ben been off his premises the second time — that just might have been that!”