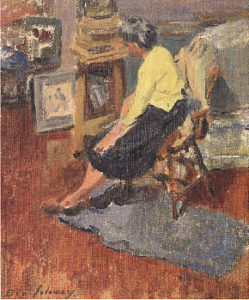 Ben Solowey has often been called an “artist’s artist” for among his admirers there have always been artists of various styles and mediums. There is something in Ben’s honest and direct approach to his subject, whether it be a portrait, landscape or still life, that other artists find refreshing.

The painter John Foster wrote that Ben “was one of the great artist of our era.” New Hope artist George Sotter enjoyed Solowey still lifes, calling one canvas “one of the loveliest we have seen.” Of course Edward Redfield, the dean of Pennsylvania Impressionists, thought so much of young Ben Solowey’s work that he awarded the 19-year-old a three year scholarship to the Pennsylvania Academy of the Fine Arts. So it should come as no surprise that contemporary artists still find much to enjoy in Ben’s work and studio.

During the run of The Artist’s Eye, visitors to the Studio had the opportunity to see Ben’s work through the eyes of two contemporary artists, as well as view their most recent paintings. Andrea Krupp and Giovanni Casadei, two painters who share with Ben the long tradition of representational landscapes and still lifes, selected works from the Studio’s collection that explored the nuances of Ben’s work and provided insight into what artists look for in other artists’ work. Our Second Studio was devoted to recent oils and watercolors by the pair, the first Studio exhibition of work other than Ben’s.

Giovanni Casadei is an award-winning painter from Rome who now lives in Philadelphia. Like Ben, he is a Pennsylvania Academy of the Fine Arts alumnus, and in his four years there he won a lion’s share of awards (including the Mayor’s Award, the Morris Blackburn Landscape Prize, and the Philadelphia Watercolor Club Award) and various travel scholarships. He has exhibited his work at the Woodmere Art Museum, Philadelphia’s City Hall, and the Armory, as well as shows at the Hahn Gallery and the American Artist Gallery in Wayne, PA.

Andrea Krupp is a painter and printmaker in Philadelphia and has exhibited extensively both in this country and abroad. Her prints and monotypes had recently been the subject of an exhibition at the Philadelphia Print Club. She has quite a following for her limited-edition artist’s books in Paris and has taught at the University of the Arts (her alma mater) as well as on video for the mother of all printmaking products, Hunt-Speedball Company.

“I admire the liveliness and the immediacy of Ben Solowey’s watercolor landscapes and his etchings,” Andrea said at the time. “[Ben’s] watercolor landscapes look like they were painted outside, on the spot, which is my approach to landscape painting. I can imagine Ben strolling around these beautiful grounds, visiting his favorite spots and settling down to paint: recording his impressions of his world, and a moment of his life.”

The two also share with Ben a single-minded devotion to their work which stretches from its initial creation to the framing and matting, all of which is done in their South Philadelphia studios. And like Ben they have a respect for tradition , although they are not beholden to it, and have an eye for quality. “As a painter I really appreciate the honesty and the freshness of Ben Solowey’s oil paintings,” remarked Giovanni, who has also found in the Studio and its surroundings material for several of his own paintings. These three artists find uncommon beauty in common objects and scenes.
This show was so popular that its run was extended one week through August 21, 1994